Our application works quite well, but we would like to use the REST principles and manage data via HTTP requests.

In Spring Boot, HTTP requests are handled by controller classes.

In the previous post, we have created an application that automatically creates a database and adds some data to it. Let’s add controllers to it!

REST (Representational State Transfer) is an architectural style for designing distributed systems. It’s not a standard, but it defines a set of constraints such as being stateless or having a client/server relationship. The six constraints defined by Roy Fielding (REST creator):

We are ready to run the application. After run navigates to localhost:8080/currencies. We can see that application get all the currencies from the database and return it in JSON format: 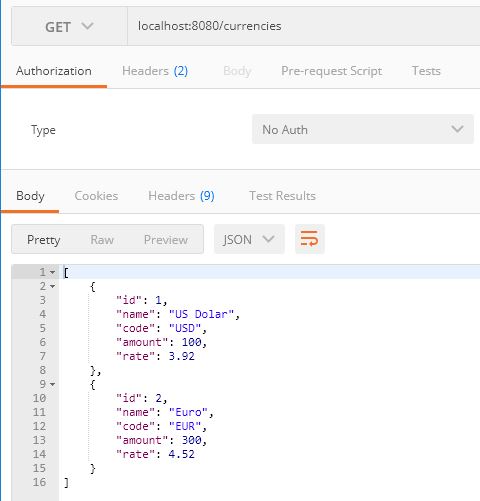 We must add a few more methods that we will need in our Wallet application.

Annotation @PostMapping ( "/currencies") maps the given path to the appropriate method that will handle the HTTP request (POST). @RequestBody annotation maps the HttpRequest body to a transfer or domain object (Currency object).

2 - updateCurrency() method which will be used to update the currency status:

In deleteCurrency() we used the @PathVariable annotation that will retrieve the currency id from the URI.