Creational design patterns deal with object creation mechanisms, trying to create objects in a manner suitable to the situation. In this article, I will describe the most popular patterns in this category and how Spring uses them!

Spring, in itself, is already an example implementation of the Factory pattern. The pattern is used throughout the entire framework. One of the primary places it’s used is the BeanFactory class.

Structure of the Factory Pattern

Firstly, you have to create common interface that you are going to use in objects factory. Then, you need to create a class that creates instances of your inteface. In that class, you have to implement a method that servers concrete classes that you will then implement from the interface itself. So, again, we have a class that has a method that creates instances of the interface when under the coverage that it’s actually creating instances in the concrete class.

The AbstractFactory class is responsible for creating several different types (in contrast to Factory Pattern). As you can see in the above example, each of the factories can be associated with different objects within the same group (in this case - products).

Let`s take a look at above interface:

Animal interface has several methods that are common to all animals (each animal has a type and name). So, now you need to create a new class: AnimalFactory

I added @Component annotation because I want the Spring to manage this factory. There is one method (factory method) which returns an Animal - createAnimal. It is a very simple factory that supports only two types of animals (cat, bird). If another type is provided, an exception will be thrown.

I added one @PostMapping method, which we will pass through the @PathVariable type and name of the animal. In response, we will get the new animal object created by the factory. Let’s test it using a postman:

As you can see, we have just created a new object - a bird using our factory.

The Spring framework uses the factory design pattern for the creation of the objects by using two approaches:

As you can see, entire Spring is already an example implementation of the Factory pattern (any Spring application’s application context is just a giant Factory)

Another common creational pattern is the Builder pattern. The popular use of Builder in the Spring is ResultAction. This class is part of the MockMcv - used for testing web applications.

Structure of the Builder Pattern

Firstly, you need to define a base class with all args constructor. Then, you have to create a Builder class with attributes and setters for each argument of the base class. Each setter should return the builder. Then, need to create a build() methid that will construct and return object of base class.

I started my implementation with a simple Java class - Employee.java:

At the end I use the public Employee buildEmployee() method that creates the employee. The advantage of this solution is that if any of our fields are null, null will be populated. We don’t really have to think about where the nulls go. Let’s take a look at action. I created BuilderController Spring controller which has two endpoints. The first creates an employee with all fields, the second creates an employee without an email:

As you probably expect, the GET request on the first edpoint returns: 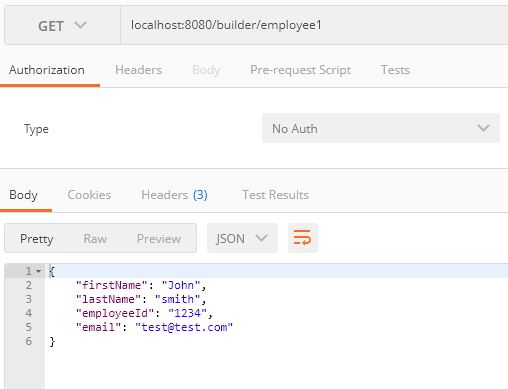 The second endpoint returns the employee with a null as an email: 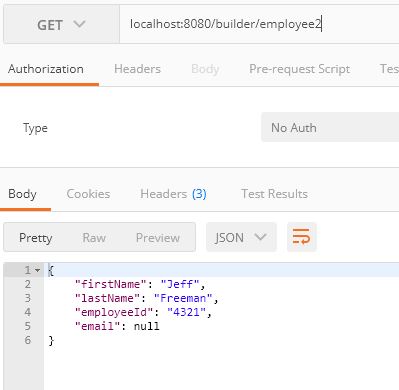 Singleton is a pattern used by every Java developer who uses Spring. Every bean is by default a singleton. Its purpose is to provide the possibility of creating only one object of a given class and providing global access to it.

In Singleton pattern, Java new Class is never called on the class except getInstance case. You should wrap this method with some locking functionality to ensure multi-thread safety.

Singleton can be used in cases:

Structure of the Singleton Pattern

There are many ways to implement a singleton, but all can be reduced to three main points:

In the following example, we will implement our own Singleton. Then we will prove that the Spring components are singletons by default. Let’s start with creating a couple of classes. The first one we are going to create is Singleton.java class which will be a traditional singleton (described in the previous point):

Next, let’s test whether our singletons ensure that only one object is created. I used the JUnit test (generated automatically when creating a Spring Boot project in Spring Initializer):

assertSame() method checks if arguments are same objects. Test result: passed - everything was the same. That`s how you can write traditional singletons or singletons in Spring.

There is one more thing you should know. As I wrote - all Spring beans are singletons by default. However, these are not the same singletons as the traditional singletons. The traditional Singleton pattern assumes that there is only one instance of a given class at the space managed by Java classloader. In Spring, there is only one instance of Bean for each given context (_org.springframework.context.ApplicationContext) instance. So, if you have more then one context, all managed by the same Java classloader, you will probably have more than one instance of a bean.

The prototype is a pattern whose purpose is to copy objects from the parent object. In the prototype pattern, a new object is created by cloning an existing object. In Java, the clone() method is an implementation of this design pattern.

The prototype can be used in cases:

Structure of the Prototype Pattern

I will not implement the traditional Java prototype. However, I will show you how to create a prototype bean in Spring. I created one dumb class: SpringPrototype.java

In the main application class in Spring, I defined defined a new prototype bean by setting @Scope to prototype:

I injected two instances of the SpringPrototype class with @Autowired. Just like in the Singleton example - I used the static method from Assert to check that the created instances are not the same. My test is green. It’s proof that there are two different instances of the same object.

I hope you liked the post. We’ve got to know the most important creational patterns used in Spring. In the next post, we will learn about structural patterns in Spring Framework!

The source code from the post is available on my Github repo.