Multithreading in Java. Java synchronization and concurrency. The most important information for a Java Developer interview

Being a Java programmer, most of us have had any contact with multithreading. One of the biggest challenges is to properly synchronize the code between threads. Fortunately, the language developers have prepared for us a full set of tools that help us achieve this goal. If you are curious or you are preparing for an interview - read this post.

Single-threaded programs are simple applications that do not require concurrent execution of tasks. Each of the tasks is run after the previous one is finished. It looks like this:

What is a Java Threads

The threads are a way for the processor to do many things at once. At a given point in time, the processor can only do as many instructions as it has cores (it’s more complicated, but this simplification will allow us to explain more easily). This would mean that you could only have as many programs running at once as you have processor cores - usually two or four on modern computers. To work around this limitation, the processor runs on threads - one program is one (or more) threads.

From the developer’s point of view, a thread is a set of instructions that he/she is going to write in the application, and execute in a certain way. An application itself can be composed of several threads and different threads can be executed at the same time.

What is Time Slicing

Going further, does that mean we can only run one thread on a single-core processor? And on a dual-core processor, two threads? Not exactly. This problem was solved by creating a time-slicing mechanism. A mechanism that allows one processor core to run multiple threads. However, this does not happen in parallel. The image below shows the tasks from the previous point. This time each of them is run in a separate thread, so we have three threads. The mechanism that supervises their work (Thread Scheduler) ensures that from time to time the current thread is stopped. Another thread is woken up, gets processor time and is executed by it. This is known as Context switch. The sum of the lengths of rectangles in a given color is the same as in the previous example.

It should be remembered that such an approach does not speed up the execution of tasks (it takes time to stop and wake up the threads) - but it does allow to process each “rectangle” a bit. For what purpose? Imagine such tasks:

The green rectangle is a task to open the browser with the last tabs saved (one million tabs). In the meantime, the user presses the night-mode button, which is a very quick task (red rectangle). Unfortunately, it has to wait until the browser is finished opening tabs. Only then will the next task be executed. The same task can be split, and even though each task will take the same amount of time - the user will start the night-mode much faster. He will not have to wait for the browser to open:

This approach avoids starving the threads. In the above example, without time slicing, the thread with the green task would starve the threads with the blue and red tasks.

Multi-core processors give you the real ability to run multiple tasks in parallel. In this case, if each of the tasks is run in a separate thread, the situation looks like in the picture below: 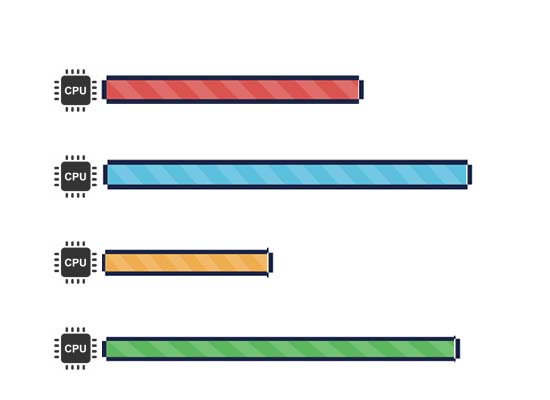 In your applications, you’ll meet a combination of both approaches. The image below shows an example of how the task is executed on two cores.

As I mentioned earlier, parallel tasks are only possible on a multi-core CPU. It is important to remember that

When there is just one processor, the OS scheduler context switches between different threads to provide concurrent execution.

When there are multiple CPUs, each CPU essentially runs an instance of the OS scheduler, thereby executing threads that are waiting to be run. The result is parallel execution of the set of threads to be executed.

The threads use the same data (they share the address space). This means that objects available for one thread are also visible in other threads.

Variables are available for all threads. Therefore, all threads can modify these variables. This has very serious consequences. I will describe them in more detail later in this post.

Every thread in Java is related to the Thread class. There are several ways to create a thread.

The first way is to create your class, which inherits from Thread class:

In this case, you have to override run() method - it will be executed in a thread. Extending the Thread class is not good practice. Note that in Java each class can extend only one class. When you extend the Thread class, after that you can’t extend any other class which you required. Additionally, extends in Java is used to add/modify some functionality from a subclass. In this case, we do not add/modify anything to Thread class.

Implementation of the Runnable interface

The second way is to create a thread using the Thread’s constructor, which accepts the object implementing the Runnable interface:

This time the body of the thread is the implementation of the run() interface method (the thread will run this method and will work until it is done). Note that you can create a thread using anonymous classes:

Additionally, the Runnable interface is a function interface. Therefore, this can be simplified by using lambda expressions:

ExecutorService is an interface that we do not have to implement on our own, the Java provides us with ready-made implementations. Thanks to that we can easily create a thread or a pool of threads, which will work according to our expectations. The most important methods that this interface provides are:

submit(Runnable task) - allows you to send ‘task’ (implementation of the Runnable interface) to be executed (note: we have no guarantee that it will be started immediately! It depends on the current status of ExecutorService, task queue, available threads, etc).

shutdown() - allows you to finish threads correctly, previously completing all tasks and releasing all resources. Calling this method is required before the application is finished!

A detailed explanation of how ExecutorService works and examples will be presented in the next post.

Creating a thread is just the beginning. Each thread has its life cycle. Threads can be in one of six states. Permissible states of the thread are in the Thread.State enumeration class:

You already know that threads share the address space. I’ve described it in the subsection #concurrent-data-processing. It has very important consequences. See the example below:

There are three threads in the above code, each of them 50 000 times increment the value of the variable by 1, so the finish counter value should be 150 000, right? Try to run this code several times. What results do you get? In my case, the results were returned:

What you’ve seen above is race condition. This happens if several threads at the same time modify a variable that is not adapted to such a parallel change. But why did the value attribute have such different values? This is because the value++ operation (value = value + 1) is not an atomic operation.

In the previous subsection, I described time-slicing. It plays a key role here. Imagine a situation in which the T1 thread execute steps 1, 2 and 3 and was context-switching started. Then threads T2 and T3 took step 1. Then thread T2 took steps 2 and 3. After a while, the same happened to thread T3. As a result, threads overwrite outdated values. One of the scenarios is shown in the table below:

In the example above, operation 9. sets the value to 2 in the T3 thread ignoring the increase in value made by the T2 thread in operation 7. To avoid race condition, it is necessary to synchronize the threads.

In general, thread states are intuitive. The descriptions in the previous section help you understand what happens to a thread in a given state. Well, maybe apart from the BLOCKED state. When is the thread BLOCKED?

With a synchronized block, you can be sure that everything inside the block is running on up to one thread at a time. Try to run the modified example from the previous subsection several times:

Each time the application returns the correct result - 150 000.

You can also use the synchronized keyword for the method:

Remember not to abuse synchronized. The code in a synchronized block can only be executed by one thread (it loses the possibility of concurrent execution), which makes the execution of such a program slower. Use synchronized only in places where it is necessary.

One of the ways to put the thread in WAITING state is to call the Object.wait() method. What the wait() method does? Imagine a situation where you have two threads. One produces some data, the other consumes it (Producer-Consumer Pattern). 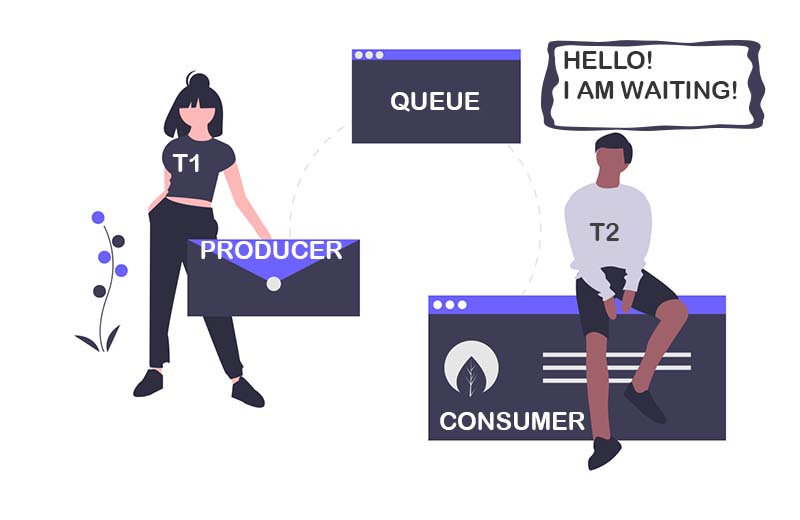 The data-consuming thread (T2) uses a while loop, which is executed until the expected number of items is taken from the queue. The program works. However, it has a subtle problem. Consumer thread works all the time. It takes up CPU time continuously! What’s more, for most of its time, it revolves inside the loop, checking if there are any new messages in the queue. How can this problem be solved? One way may be to put the consumer’s thread to sleep using the Thread.sleep() method. This would also be a waste of time - how do you know how long it will take to produce the next message? For this purpose, it is better to use the notification mechanism.

All Java objects, except monitors, contain a special wait set. The elements of this set are threads that wait for notification about this object. The only way to modify the content of waiting set is to use methods available in the Object class:

Interruption of the thread

Java provides another mechanism which is connected to synchronization - volatile. The Java specification says that every read of an attribute preceded by this keyword follows its writing. In other words, the volatile modifier ensures that every thread reading a given attribute will see the latest saved value of that attribute. However, you have to watch out for modifications that are not atomic - unfortunately, volatile will not protect you. In this case, you will need the synchronization described earlier.

You’re probably wondering what this mechanism is for and what the risk is not using volatile. Imagine a multi-threaded application on a single-core processor: 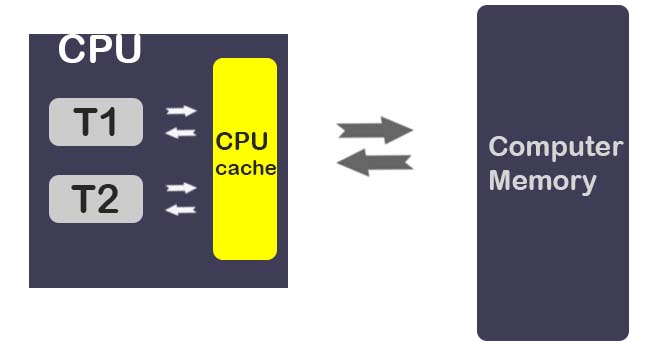 The variables are copied from the main memory to CPU cache (due to a much faster access to the CPU cache compared to RAM access time), Now the threads access the memory from the CPU cache rather than computer memory to save time and increase the performance. There’s nothing dangerous here. Let’s go to the 2-core processor: 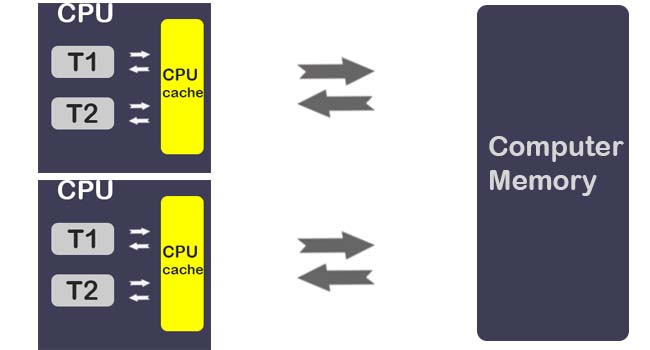 To protect from this problem, just use the volatile keyword.

volatile is keyword used with variable to make sure the value are read from and written to main memory rather than CPU cache.

This ensures that you get the “really” correct value of the variable.

As you can see, there are many thread synchronization mechanisms available in Java. Please take a look at them to better decide which ones to use when. If you want to know more about concurrency, there will be a post about ExecutorService soon!